Today in the Herbal Kitchen: Blueberry tincture and other things 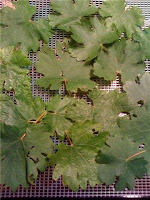 I had blueberries I wasn't using so I dehydrated the blueberries, then ground them. I placed the ground blueberries in a 1:2 ratio with vodka and have been keeping in a jar in a cool and dark location. The tincture should be ready next week to strain and bottle. I am planning on adding it to my lotion making ingredient list, thinking it would bring antioxidant strength and interesting coloring. It's been sitting now for about 1 week. Today, I read that the blueberry tincture is said to be a great facial astringent and may be effective against facial herpes and as intestinal disinfectant. People have used 15 drops a day for children; 40 drops for adults, so this tells me it can be pretty mild and can be used by most of us; however, a tincture in glycerin rather than vodka would be more appropriate for children.

Also going on in the "herbal pantry": dehydrated grape leaves (shown in picture just before being dehydrated) and grape leaf infusion with red palm oil. This is an experiment and we shall see how this turns out in two weeks. Grape leaves are very high in Vitamin A and Vitamin K. The red palm oil is very high in Vitamin A and is reported to be a high antioxidant. I have plans for this infusion but since it's experimental anything can happen.
I'm also going to make a salve today. I've been using the Calendula tincture on Basil's paw and it has helped heal the infection he has had on his pad. He must have cut it on something and it was having a hard time healing. Now it looks much better, giving me the idea to make a Calendula salve safe enough for cats to ingest while grooming themselves. So now I'm off to the "herbal kitchen" to whip up a batch of salve for my spoiled kitty..... ;)
Posted by Hill Country Herbalist at 10:06 AM