So, I was making dinner and boiling some potatoes. I knew I had overfilled the pot with too much water so I went to the sink to pour off some of the water. I felt heat and thought to myself, "I didn't have the pot on the stove long enough to be feeling this kind of heat...why is it so hot?" That's when the heat became so unbearable I put the pot down just to see the paper towel I was holding the side handle with was on fire! I was stunned! My poor fingers were feeling the fire flames coming right off the paper towel! OUCH! I stomped out the fire and then knew I had to think fast to give my fingers the best possible outcome. I grabbed the Monarda (bee balm) honey and covered my fingers with it. Honey is thought to speed up healing and is a natural antimicrobial and bee balm is a great antimicrobial, as well. I could feel the pain intensifying with each passing second....but I knew I was doing the right thing putting honey on the burns. I was so scared I may have really hurt myself I found it hard to think. I remembered Aloe (relieves pain and decreases inflammation) and Plantain (soothes inflammation and has great healing properties)...so I put Aloe gel in the cup and the only Plantain I had was in tincture form so I put several dropperfuls in the gel along with Calendula tincture and vitamin E. 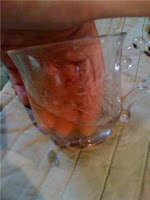 Ahhh! the cool gel felt wonderful but it still throbbed. I read I could place either a potato or onion on the burn for about 15 minutes to draw out the heat and pain. I thought that was odd, but I was willing to try it. Sure enough, after 10 minutes the pain subsided. Don't get me wrong, it still hurt - just not as bad.

After the onion, I continued soaking my fingers in the aloe gel mix for another 10 minutes then another round of honey. I kept on with dinner (it was delicious) and then bandaged up my three fingers in paper towels (all I had) that I had soaked with colodial silver, a wonderful natural antibiotic. 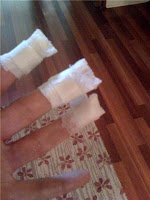 I am just hoping the blistering won't be so bad. I'll know as the night goes on, but for now....I'm happy to be an herbalist. I don't know how this would have turned out if I didn't have my home remedies to lean on.

...I still can't believe I caught a paper towel on fire...I need a vacation!
Posted by Hill Country Herbalist at 7:57 PM

Just as a follow up, last night I placed more honey on my fingers then capped them with my homemade bandages and kept them covered all night. This morning, The skin looks great - they feel a bit sore - but they look great.

Also, I read St. John's Wort oil also helps skin heal and helps with burns since it is good at reducing inflammation.