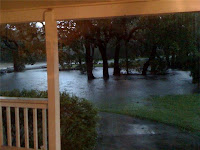 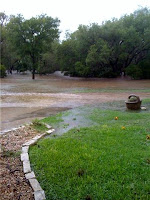 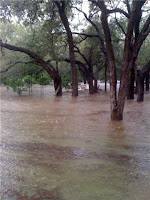 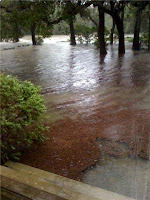 At 2:30am I woke up hearing one boom after another followed by lightning and horizontal rains. There was no sleeping through the booming thunder last night. At 6:30am we received a call from a neighbor up the way who was away on a trip. He had received a call from the security alarm company indicating a signal had read an indoor fire at his place. Alarmed, my husband went to go check on the house and the dog who was there. Fortunately, there wasn't a fire but unfortunately there were several other fires in New Braunfels the fire department needed to attend to. The lightning was hitting hard last night.

The electricity would turn on and off but what was more concerning was the 11 inches of rain we were getting in just 4 hours. News reports of a mobile home floating down the river with people still inside haunts me. I still don't know how they are doing, but I hope they are all okay. A local tubing outfitter, Rockin' R, flooded and all their tubes and rafts floated away and their outbuilding where they were stored collapsed.

Meanwhile, at my house - I was closely watching the water rise higher and higher on the land. As the creek swelled, the driveway became indistinguishable from the rest of the rushing water. On any other given day, you would be able to see the driveway in all of these pictures.

When the rain eased around 8:30 this morning, the water receded and eventually the creek sounded like a trickling stream - peaceful and beautiful. The water is so powerful. School buses used to transport tubers at Rockin' R were strewn about like toys bent around trees, yet there was an quiet calm after the torrential rains. Amazing how powerful the rushing water can be.

Later, after checking on a fix'r upper river house we purchased in downtown New Braunfels - 40 feet over the Guadalupe river - a pair of hot pink underwear was found hooked and dangling 20 feet from one of the sycamore trees in the back of the lot. Flooding or not - gotta love this town.
Posted by Hill Country Herbalist at 7:44 PM